Gallery 1 Red Pill critiques the culture and future of post-internet masculinity through signifiers found in artworks, objects, and found footage.

Gallery 3 The Number You Have Reached is an exhibition about the ubiquitous presence of surveillance, with International and Australian artists considering its role and influence in our lives.

Gallery 5 Also appearing is Store, a new work by Paige Alderdice and Shannon Lyons, as the inaugural exhibition in new programme of site-specific works by exciting local artists. 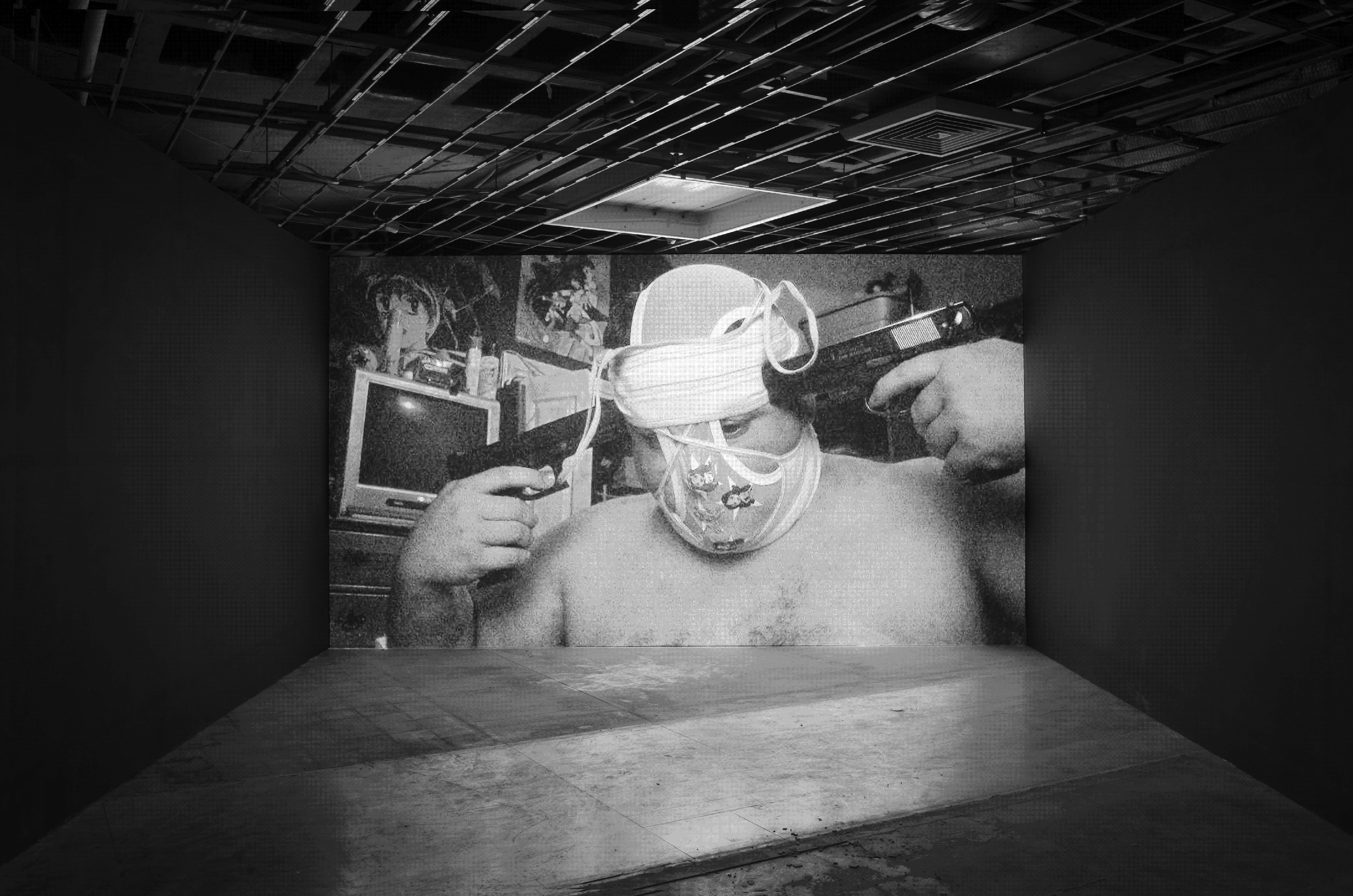 Red Pill is an experimental exhibition of artwork, objects and found footage which explores a perceived crisis in contemporary masculinity.

In the 1999 film The Matrix, the red pill represented the choice to confront a difficult truth over maintaining a comfortable illusion. ‘Taking the red pill’ was a decision to refuse the technologically mediated simulation of the matrix, and to instead perceive the apocalyptic real which it concealed.

In 2016, The Red Pill is the name of an internet forum for men’s rights activists, for whom the ‘difficult truth’ is the supposedly diminished position of men in a contemporary society dominated by feminist ideology. In this culture’s obtuse and misogynistic logic, members attempt to restore the stature of their masculinity through a combination of predatory dating techniques, internet bullying, and self-improvement exercises on the lost masculine arts of grilling steaks, appreciating classical music, and looking good in suits.

Recognising this new style of post-internet activism as a key force in the rise of social extremism and as a seedbed for the next generation of reactionary politics, Red Pill attempts to understand the identifiers of a fragile masculinity characterised by dysphoria, anonymity, self-loathing, emasculation, and rage. 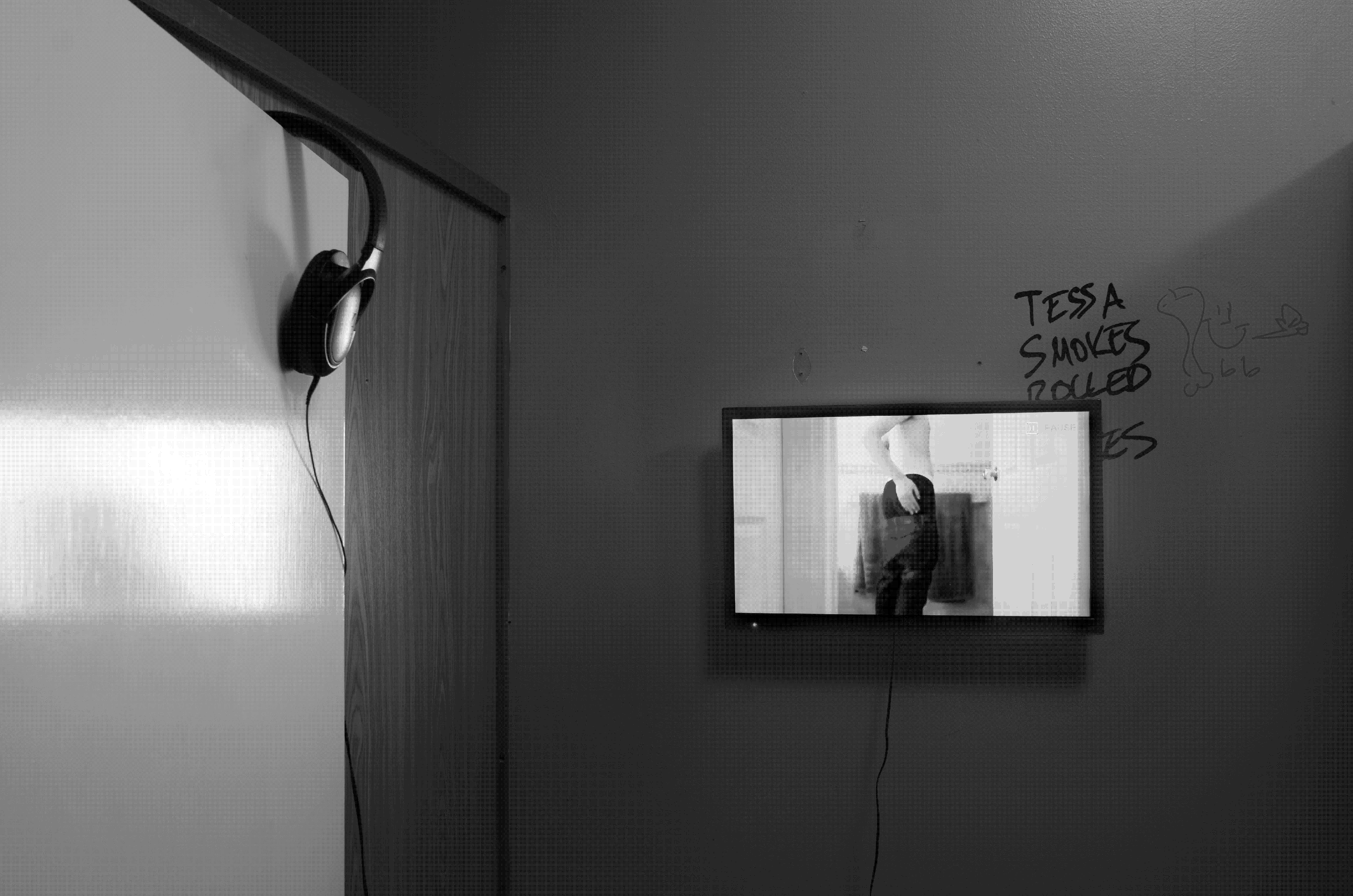 Lingchi - Echoes of a Historical Photograph

Taiwanese artist Chen Chieh-jen appears in his first West Australian solo show with a three-channel video work that considers the linked history of photography and colonialism.

Chieh-jen recreates an early 20th century photograph that was circulated throughout Europe in the late 19th and early 20th centuries as an example of the exotic barbarity of China. The ‘Chinese torture’ of Lingchi (death by a thousand cuts) is reenacted in this video work in excruciating slowness that mirrors the pace of the torture itself.

The camera travels into the bleeding wounds on the victim’s chest to reveal places and people that represent the impact of colonialism. The fragmented, mutilated body becomes analogous to the body of Taiwan, a stand in for political struggles between China and Taiwan and the separation of the countries by colonial powers.

A volatile image of the past is used to disclose the effects of globalisation within contemporary Taiwanese history, politics and society. Lingchi - Echoes of a Historical Photograph is curated by Laetitia Wilson.

The Number You Have Reached

The Number You Have Reached is an exhibition about the ubiquitous presence of surveillance in our lives. Each artist in this show considers the role of surveillance and the permeations of its influence, both material and symbolic.

Forming the backbone of an increasingly normal organisational existence, surveillance has far exceeded its typical boundaries of use for crime prevention and security. It is no longer a trait of rogue security states and governments, but an increasingly common way of looking and listening.

Within a reterritorialisation of surveillance, the international and Australian artists in this exhibition have responded to the challenge of finding new ways of operating. Classification systems, online and televised realities, data collection and pedestrian profiling are all considered, along with their social and political implications. The ‘back end’ of our digital life is brought to the fore, and our public and private lives are further conflated.

The Number You Have Reached is curated by Sarah Werkmeister and Tim Woodward.

Install view: The Number You Have Reached.

In the dedicated Gallery Four performance space, curator Lyndon Blue presents Katie Campbell, also known by her dance-music production moniker Catlips, has gone from strength to brightly-hued strength in recent years. Armed with a bevy of electronic hardware, a degree in composition, a knack for amazing leftfield hooks and a taste for the ambitious and extravagant, Campbell has quickly become a local and national favourite.

Beyond the hyperreal, energetic sound-world of Catlips, she has remained a core member of much-loved Perth experimental act Kucka, as well as Outlordz and Wasabi Peas. 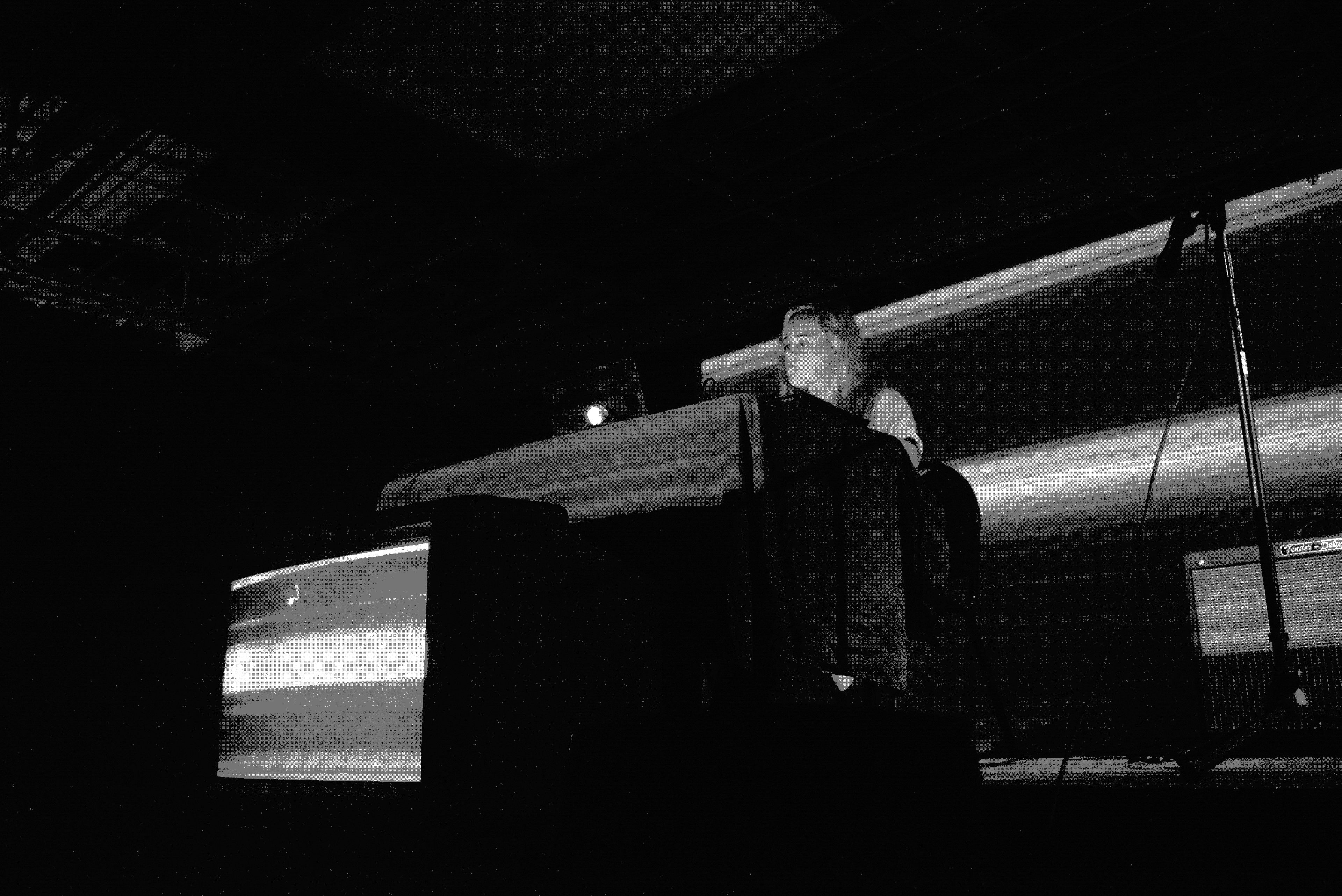 Between the new galleries of Success, remnants of its past life as a department store persist. The Other Spaces programme will open these staff rooms, awkward architectural blind-spots, and unfinished culs de sacs for new works by Western Australian artists. Curated by Jack Wansbrough, Other Spaces invites local artists to make site-specific artwork engaging directly with these strange places and their history.

Store is a new site-specific work by Paige Alderdice and Shannon Lyons, and the debut exhibition of Other Spaces. The renovation to transform the vacated basement into Success has left behind an extensive collection of the original fittings, materials and artefacts from previous occupants. Store works with these found materials and the spatial peculiarities of the annex rooms in Success to touch on the political, emotional and social aspects of the former Men’s Department which closed more than 10 years ago.

Alderdice and Lyons are West Australian artists with an affinity for artistically responding to built environments. Their individual practices have experimented with how sculptural interventions can disrupt viewer’s understanding of space, and how it is physically, emotionally and intellectually negotiated.

The artists have worked together closely at Curtin University where in 2015 Alderdice completed her BFA (Hons) and Lyons her doctorate. Store is the first of their collaborative artwork. 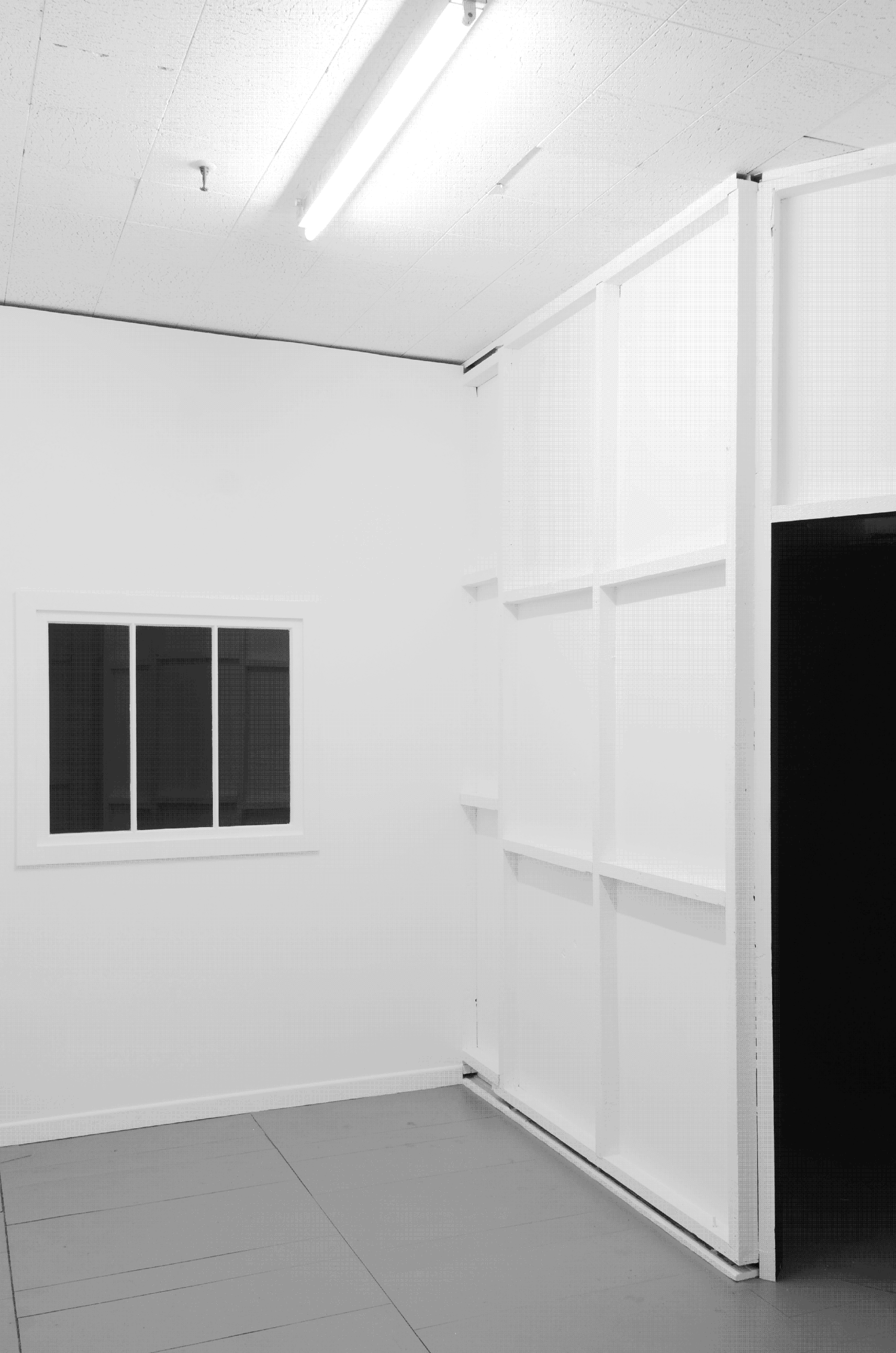